Paint The Town and Artist Videos

In May of 2020 I was commissioned by Paint The Town (Blackburn) to make a short film of my process as I created an digital illustration depicting my lockdown life. This short film, a first for me, enabled me to learn skills and develop an approach which has resulted in further projects using video in participatory arts and in November 2020 I facilitated workshops on Zoom for artists taking part in the Creative Accelerator programme, sharing some of my learning around schools work and how to create videos for work in the classroom.

You can watch that first video here and below is the resulting ‘Lockdown Life’ illustration. 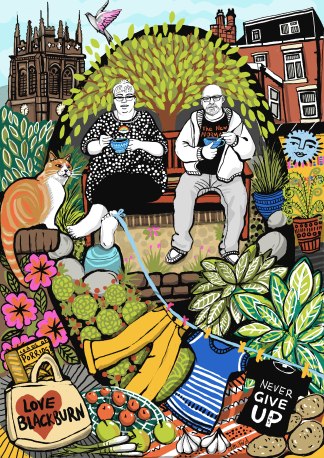 Kick Down The Barriers

In early 2020 I was commissioned to facilitate the schools programme of this project inspired as a way of challenging commonly held perceptions of Blackburn being a divided town. Covid-19 and lockdown forced significant changes on the programme, and instead of visiting eight local schools I created a series of short videos which were shown in school to support and inspire children to create self-portraits which explore and communicate their feelings, interests and ambitions. The final portraits (300 of them in total) were exhibited in Blackburn Museum and Art Gallery as part of the KDTB exhibition.

Real People Honest Talk is an initiative by Near Neighbours which is about bringing people together to talk about the tough issues around how we live together well. I have facilitated projects in both of the local rounds in Blackburn over the past two years, one at The Bureau and one at BBC Lancashire. Over three Small Conversations, groups talk about issues and interests, with the aim of finding some practical solutions. The programme closes with a Big Conversation, bringing all groups together to share their findings and to connect with other local groups. There’s a short film of our first Big Conversation, which you can find here.  Find out more about Real People Honest Talk here. 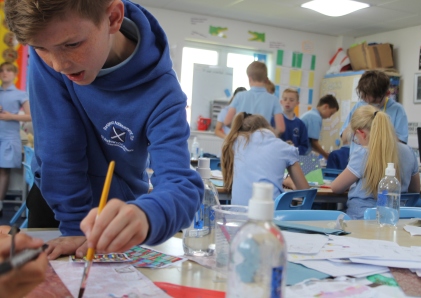 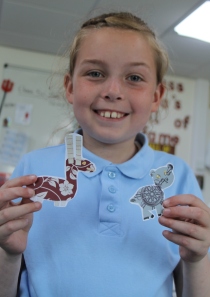 As part of a local heritage project, I had the pleasure of working with two Year 5 classes at an Oswaldtwistle primary school to create objects for an animation by Huckleberry Films about the life of Ethel Carnie Holdsworth, a local writer and the first working class woman to have a book published. There was some lovely feedback from Caroline of Huckleberry Films, who visited one of the sessions.

It was really wonderful to see the session taking place, hear about the new techniques the pupils are learning and answer a few questions about how animated films are made. The class really responded to Cath and the way she engaged them, and it was a real treat to see such a talented practitioner at work. 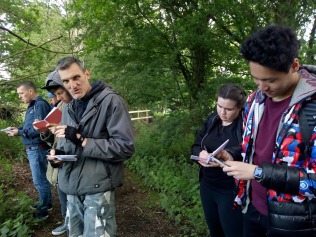 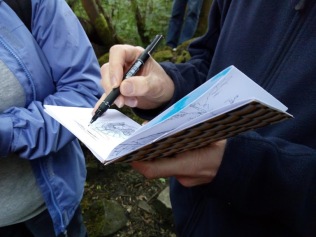 In June 2019 I worked with People Enjoying Nature (part of the Pendle Hill Landscape Partnership) to facilitate a drawing walk on a stretch of Martholme Greenway.

Cath led a drawing walk for the People Enjoying Nature project, and even with the risk of heavy downpour (which was avoided) and thunder (which was not), we had a wonderful session. The participants all had mixed level of ability and art enthusiasm prior to the session but Cath definitely gave them the focus to look at the landscape in a slightly different way. The session itself brought a new light to drawing and also walking, and encourage the participants to observe more of what’s around them. One participant, a regular on the sessions, has never got so involved in a creative session before – he got fully stuck in and really enjoyed it – which I think was down to Cath’s instructions and guidance. Thanks Cath!

The View From Crime Lake 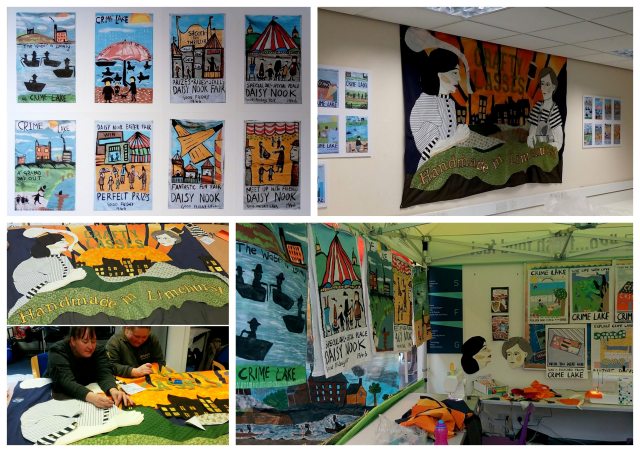 During late 2017 and early 2018, I worked with Crafty Lasses and Limehurst primary schools on an HLF project inspired by the Lowry paintings of the area and which explored the leisure and social lives of people in the community over the years.

An exhibition of the work, including painted and sewn banners and mixed media postcards, is now on display at Limehurst Library following its stint at Odham Museum.

Working with young people from different communities of Blackburn and Darwen we created a physical response to a recent report citing Blackburn as ‘The most segregated town in Britain’. Using the phrase inspired by Jo Cox MP ‘There is more that unites us than divides us’ the young people created a bridge sculpture which was presented at the annual SLYNCS awards ceremony. The bridge is designed to also be dismantled and displayed as a flat wall mounted piece in the SLYNCS base.

During 2016 I worked as an artist with Creative Support in Blackburn as part of the Super Slow Way Community Commissions. Creative Support Social Inclusion Project in Blackburn works with people with mental health issues to reduce isolation, build confidence and support people to play an active part in their community. Over the year we met weekly, making art and most importantly, creating happiness.

Find out more about the project and my role on the Meet Our Artists page, which also includes a video interview or visit the project blog.

A partnership between Regenda Housing, Oldham Arts Development and Arts Council England, Limehurst Art Society aims to support local residents to develop new skills and confidence through participating in art and creative activity. During 2016/17 I worked with a Craft Enterprise Group to make items for sale and plan and deliver craft markets and events. During Autumn 2016 I facilitated a ten week community arts course for local residents, particularly people who volunteer in the community, who learned facilitation, project management and making skills. The group now runs family art and craft sessions during the school holidays.